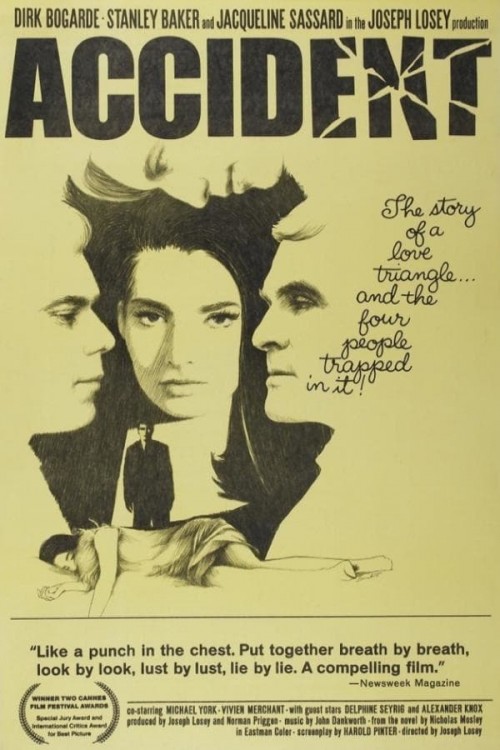 Get more information about Accident (1967) on IMDb

The Oxford professor of philosophy Stephen has two favorite pupils, the athletic aristocrat William and the Austrian Anna von Graz. Stephen is a frustrated man, with a negligent wife, Rosalind, who is pregnant of their third child, and is envious of the Oxford professor Charley that has a television show. Stephen feels attracted to Anna, but William woos her and she becomes his girlfriend. Charley has a love affair with Anna but when things go wrong, Anna must leave town.

Nam Yarasree
Joseph Losey is one of my favorite. A very good film, a good description of bourgeoisie and high class people, their lies and frustrations. - @Saturday, April 1, 2017 9:47 PM
Paul graham edward Spencer
Beautiful film one of mu favourites - @Wednesday, December 23, 2015 10:05 PM
Johnny Buck
My favorite Bogarde movie. A lot of great movies came out of the UK in the late 60s, and this is one of the best. - @Saturday, May 31, 2014 4:03 PM
Zdrohce Chordz
gotta catch it soon!  - @Thursday, May 29, 2014 8:50 AM
MsFanmail
WHERE IS THE FULL MOVIE OF THIS ON U TUBE ? - @Saturday, August 3, 2013 9:48 PM
Fazal Miles
Awesome movie, also The Servant, another Losey-Pinter-Bogarde collaboration. - @Tuesday, May 21, 2013 2:42 AM
theuofc
Thanks very much for sharing the trailer of ACCIDENT, a superb Losey-Pinter-Bogarde collaboration. - @Friday, January 13, 2012 4:03 AM
peteratanas
Very impressive film by american director joseph losey ( a collaboration with english writer and nobel - price winner harold pinter ) . a masterpiece and cinematographic classic of all times . - @Sunday, October 2, 2011 5:05 AM