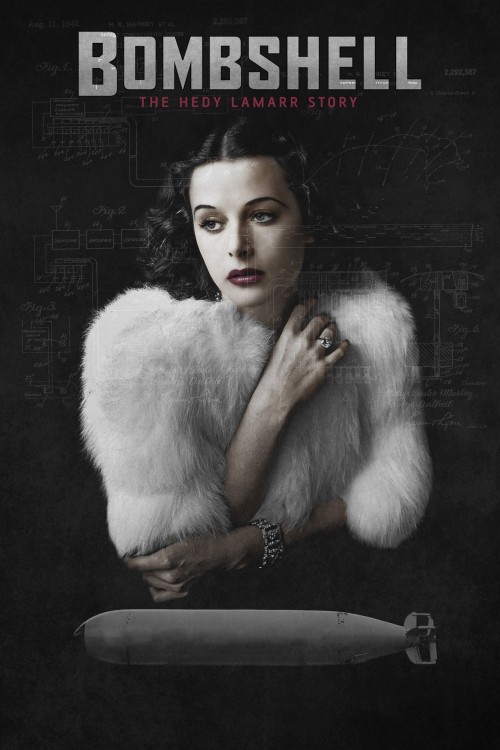 Get more information about Bombshell: The Hedy Lamarr Story (2017) on IMDb

Hedy Lamarr was a Hollywood movie star who was hailed as the most beautiful and glamorous in the world. However, that was only the surface that tragically obscured her astounding true talents. Foremost of them was her inventive genius that a world blinded by her beauty could not recognize as far back as her youth in Austria with her homemade gadgets. This film explores Lamarr's life which included escaping a loveless marriage on the eve of Nazi Germany's conquest of her nation to a new career in Hollywood. However, her intellectual contributions were denied their due even when she offered them in the service of her new home during World War II. Only after years of career and personal decline in her troubled life would Lamarr learn that her staggering aptitude created brilliant engineering concepts that revolutionized telecommunications, which forced the world to realize the hidden abilities of a woman it had so unfairly underestimated.

SuperSix Delta
I heard she could make one hell of a sandwich. - @Thursday, November 22, 2018 8:37 AM
Lawrence C
she should have been in school studying maths and science, not making movies - @Monday, November 19, 2018 7:49 PM
thandiwe mdaka
CAN'T WAIT TO WATCH THIS :) love the women who have made the path for the rest of us! - @Monday, September 10, 2018 8:01 PM
SuperSix Delta
"that's Hedley" - @Tuesday, September 4, 2018 9:14 AM
Wenzel Dashington
Didn't need to mention "Immigrant" because she wasn't, she had her papers. But u know Hollywood leftist need to push an agenda. #BlackConservatives #MAGA - @Saturday, August 18, 2018 11:43 AM
Dakota Rain
Just goes to show you that women can be more than just beautiful - @Friday, August 3, 2018 3:22 PM
Alain Brice
Wow what a powerful woman 😍😍😍😍😍😘😘😘😘 - @Thursday, June 28, 2018 12:39 AM
Kinopanorama Widescreen Preservation Association Incorporated
Superb. Watch it. You will be amazed. - @Saturday, May 26, 2018 7:05 AM
Chitru Shrestha
A must see.. it was amazing!!! - @Sunday, May 20, 2018 4:45 PM
kevshorty
Oh ok her technology was used to make wifi. She did not make wifi directly. I'd like the credit to actually go to the people who made up the idea of wireless internet. Let's just praise her for making what she actually invented - @Thursday, April 19, 2018 2:13 AM
Ruby
HEDY. Of course Vivien was also beautiful, and they look similar. But, did not like Vivien Leigh's smile. It kind of looked 'fake' or 'put on'....I guess is how to describe it. ( Even in " Gone With The Wind", her smile just didn't look genuine.). As HEDY was really quite beautiful, and had a more real lovely smile and features. I think the 'stronger' features of Hedy are much more alluring. - @Wednesday, March 28, 2018 12:42 PM
V Queen
I've made a speech based on Hedy Lamarr and her life. I've focused not on her accomplishments but also what she has been through to reach that accomplishment. Here are some of my classmates' thoughts about Hedy Lamarr after I've made my speech: A wonderful woman with her wonderful design. She is an inspiring person who represents many females issues. Her invention was made to innovate. She was a very smart woman. She's both beautiful and smart. She should be respected even if she's fair and beautiful. Combination of intelligence and beauty. She is a great inventor who wants to try out things, she has many skills. She deserves to be noticed. Not only a pretty actress, also a smart and brilliant inventor. She works hard to make people recognise her invention. She was beautiful and intelligent. A wonderful woman who's not only beautiful but smart. - @Wednesday, March 28, 2018 4:13 AM
Sam Spade
What comes to mind was in Mel Brooks - Blazing Saddles. Hedley Lamarr : Meeting adjourned. Oh, I am sorry, sir, I didn't mean to overstep my bounds. You say that. Governor Lepetomane : What? Hedley Lamarr : "Meeting is adjourned". Governor Lepetomane : It is? Hedley Lamarr : No, you *say* that, Governor. Governor Lepetomane : What? Hedley Lamarr : "Meeting is adjourned". Governor Lepetomane : It is? Hedley Lamarr : [sighs, then gives the governor a paddleball] Here, play around with this for awhile. Governor Lepetomane : Thank you, Hedy. Hedley Lamarr : No, it's Hedley! Governor Lepetomane : It is? - @Monday, March 26, 2018 3:19 PM
Guadalupe Alvarez
Amazing!! Awesome!!! Inspired!!!! - @Sunday, March 18, 2018 5:56 AM
Laura M
Does anyone know what the music is? - @Saturday, March 10, 2018 12:27 AM
sara35ish
This documentary is awesome. Hedy Lamarr was a mix of beauty and brains. - @Monday, November 27, 2017 9:02 PM
jasobres
That’s _Hedley!!!_ - @Sunday, November 26, 2017 5:56 PM
Panini
Huh not many comments - @Monday, November 13, 2017 11:09 PM
echolot
she could pass for catherine zeta-jones' mother - @Thursday, November 9, 2017 7:24 PM