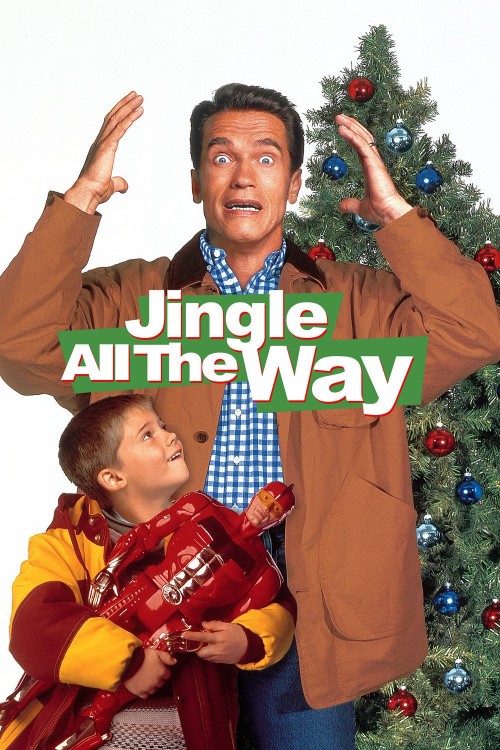 Get more information about Jingle All the Way (1996) on IMDb

Meet Howard Langston, a salesman for a mattress company is constantly busy at his job, and he also constantly disappoints his son, Jaime, after he misses his son's karate exposition, he tries hard to come up with a way to make it up to him. Jamie says he wants for Christmas is an action figure of television hero Turbo Man. Unfortunately for Howard, it is Christmas Eve, and every store is sold out of Turbo Man figures; now Howard must travel all over town and compete with everybody else including a mail man named Myron to find a Turbo Man action figure, and to make it to the Wintertainment Parade, which will feature Turbo Man.

Sam Roberts
Haven't seen this movie. Will check it out for the first time this year with boxxy software app. - @Tuesday, December 18, 2018 3:10 PM
Jubeininja69
"daddy I don't want it anymore" - @Saturday, June 17, 2017 12:04 AM
TAhowardrocksx2
There's actually a director's cut to this movie. It seems like Jingle All the Way can be seen as a Christmas movie and as a parody of how crazy people get during those Black Friday sales. - @Sunday, December 18, 2016 3:18 PM
Mella Bella
This is gonna be me tomorrow going for the NES Classic Edition lol - @Saturday, December 3, 2016 11:52 PM
CanadaDragon1
Happy 20 Year Anniversary! IT'S TURBO TIME!!! - @Tuesday, November 22, 2016 10:36 PM
Ty'Zell Anderson
Tyzell Anderson stars in this hilarious comedy as a father desperate to buy that must-have present during a frantic Christmas Eve shopping spree. Howard Langston (Anderson) has promised his young son a Turbo Man action figure for Christmas, unaware it's the season's hottest-selling toy. And so begins a frenzied quest that pits Howard against a stressed-out mailman (Kevin Anderson). - @Monday, November 14, 2016 3:32 AM
linda flannery
Taken From Alaska Fly Away Home House Arrest Space Jam Logan Battle The Movie D3 The Mighty Ducks And Matilda 1996 AMC Theaters - @Thursday, September 8, 2016 9:12 PM
rosvel92
You don't wanna make young Darth Vader sad on Christmas, you know what he does to his paternal figures... - @Wednesday, August 24, 2016 1:16 PM
Jason Loterte
home alone 3 and this one is my favorite christmas movie - @Wednesday, September 30, 2015 12:29 PM
Andrew Schroy
"PUT DAT COOKIE DAAAAAAHHHHHNNN!!!" - @Tuesday, March 10, 2015 12:36 PM
BatmanWorldHero1
Jingle All the Way is truly one of the best Christmas Movies Ever! One of my favorite Arnold Schwarzenegger movie! Sinbad is also starring in this film & he is really an amazing actor! Superb!!!!!!! Only and idiot who doesn't have a soul & a brain could dislike this movie! More movies like this need to be made starring Arnold Schwarzenegger & Sinbad in the same movie! This is a stellar classic + old school movie that never gets old & will always last forever!!!!! - @Friday, December 19, 2014 7:22 AM
Th3_Watchman
There's a second one. But it has Larry the Cable Guy. - @Thursday, December 18, 2014 6:05 PM
20th Century Fox
#TBT  Trailer: +Arnold Schwarzenegger . Sinbad. Turbo Man.  - @Thursday, December 18, 2014 5:46 PM