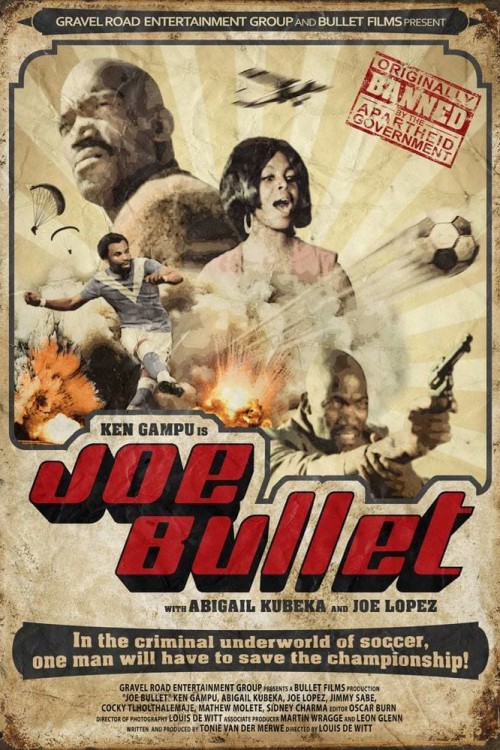 Get more information about Joe Bullet (1973) on IMDb

When local soccer team The Eagles fall prey to a series of onslaughts from a mysterious gangster only a week before the championship final, the team turns to the one man that can help save their chances at victory - Joe Bullet (Ken Gampu). Joe will have to battle against villainous henchmen, escape booby-trap bombs and bring his martial arts expertise to the fore in order to survive an attack from a deadly assassin. In the end he will have to infiltrate the mysterious gangster's hide-out in a dangerous cat-and-mouse rescue mission to save not only The Eagles' two kidnapped star players, but that of his beautiful love interest, Beauty (Abigail Kubeka). The odds will be stacked against him, but he's the man that fights crime, the man that no one can tie down! Joe Bullet!

Gravel Road Distribution Group
This is a trailer of Joe Bullet – a film lost in the 70’s but now found + digitally remastered by the Waterfront Film Studios. f you watch the trailer, you will see a great amount of landscape shots. Our landscape lends itself to beautiful cinematography! https://www.youtube.com/watch?v=J3S-nxLoqkA That's why we have begun a blog series entirely dedicated to showcasing African Myths! check it out CLICK: www.retroafrika.com! - @Monday, May 18, 2015 10:33 AM
Tommy Vision
Love it. Who does the music? Good luck with the flick... - @Thursday, October 23, 2014 7:09 AM
BIP Films
great South African film art and jewel please bring them back for young people to see where we come from as African Cinema, Ken Gump the Legend - @Tuesday, October 21, 2014 11:15 PM
Thulani Mavimbela
Great Project ....  - @Sunday, September 14, 2014 5:52 PM
Night Of The Trailers
Amazing trailer, can't wait to see this! - @Monday, July 7, 2014 1:56 PM
Paul de Bruin
Awesome job. Been looking for this film for years. I am praying it’s available on DVD or as a digital download somewhere? Please let me know.﻿ - @Friday, January 24, 2014 5:08 PM