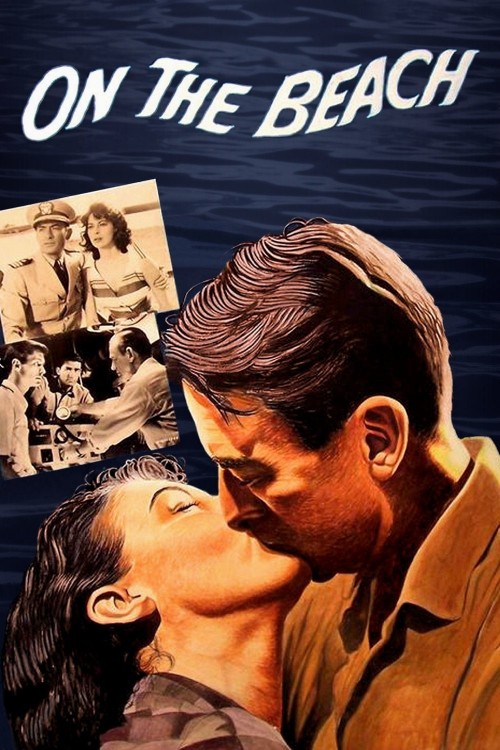 Get more information about On the Beach (1959) on IMDb

In 1964, atomic war wipes out humanity in the northern hemisphere; one American submarine finds temporary safe haven in Australia, where life-as-usual covers growing despair. In denial about the loss of his wife and children in the holocaust, American Captain Towers meets careworn but gorgeous Moira Davidson, who begins to fall for him. The sub returns after reconnaissance a month (or less) before the end; will Towers and Moira find comfort with each other?

yan k
thanks for sharing felixxxx999 - @Monday, October 22, 2018 11:03 AM
hebneh
“...the glittering array of celebrities...” - @Saturday, August 25, 2018 2:36 AM
Adrian Jackson
After 4.43 minutes we are not told most of the film was filmed and set in Melbourne. No mention of the books author other than a brief gimps of his book. I was born in Melbourne in 1952 and have lived there most of my life and now too. I was 7 when the film was made but I have no recollection of the film being made in 1959 however it is great to see the Melbourne I remember back then including the new blue "Harris" electric trains which replaced the 1919 era art deco red carriages seen on the other track at Frankston. I have seen the film on TV a few times but found the fishing scene when they were singing the tune "Walzing Matilda" over and over again embarrassing. No Australian sing that song any more not even on 1959 or 1964 when the film was set. - @Sunday, August 12, 2018 11:57 AM
Claire Dobie
I'm always on the lookout for signs--especially numbers. That sub ID # is 623. Should I play it or hope it means nothing? Horribly great movie. Saw it as a teenager and it still haunts me. - @Sunday, June 10, 2018 5:18 PM
Kathleen Sisco
Neville Schute did some good books, this is only one. The Trustee from the Toolroom was also a terrific book. Yes, the hype was up there but recall this is when Hollywood was building up a movie going public. Everything we are doing today was a media hype to condition us. Remember our smoking campaign to delete smoking scenes from movies? They're back again. Ditto drinking. Always a shot in a glass to build up the liquor industry. And to think this was a time of church going and closed stores on Sunday. We are just experiments. And since we now have privatized prisons, take a minute to reflect on the build up of immigrant as criminals and rapists victimizing us Americans. The actual hard working immigrants are going to be deported and Prez Trump will loudly claim the criminals are gone while auctioning off their homes to the PayDayUsury gang. The jails are profitable as nearly all pleas are guilty. The not-guilty get to serve 20 years before being released by the Innocent Project which is the description of irony. And if the LD and Autistic are out without supervision there are either shot or jailed. And Yes, Americans do benefit; they get the DACA jobs. What a world. - @Monday, March 12, 2018 10:37 PM
Peter Savage
How soon the world forgets. We are right there again. Only this time we are frighteningly complacent. DANGEROUSLY SO. - @Saturday, March 10, 2018 4:20 AM
Tony Stubbings
Relevant again!! - @Monday, August 7, 2017 5:14 PM
warmecanic
"it´s like watching a french movie". - @Saturday, August 5, 2017 9:39 PM
Don Scott
This film was a bit early; should have been set in 2017. - @Tuesday, April 25, 2017 6:23 AM
Bob .Grant
Great story. - @Monday, December 28, 2015 8:50 PM
Dan Bloom
Imagine a movie about global warming doomsday issues with this kind of power! It could resonate worldwide! - @Monday, December 7, 2015 12:21 AM
DVDave
I want that voiceover guy to emcee my next birthday party. - @Thursday, November 5, 2015 3:56 PM
kissfan7
Wow, they weren't short on hyperbole back in the day. - @Wednesday, October 28, 2015 12:19 AM
crazybobdj
I  saw On The Beach, recently on some late night tv channel. It was excellent! ..Early SHTF - @Wednesday, July 8, 2015 6:49 AM
HistoryNET
That scene where they were discussing "how did the war start?  who started the war?", I said General Jack D. Ripper - @Monday, February 23, 2015 3:27 PM
Greg Fox
Only Hollywood would make a love story set in post World War III Saw it as a kid and re watched it. had some very good parts, worth the watch. - @Sunday, February 8, 2015 6:26 AM
jigsawzoubir
Now that's how to trailer ! - @Saturday, January 3, 2015 1:17 AM
Lowell Thomas, Jr.
WOW, I saw it, but...LOL - @Thursday, September 18, 2014 7:30 PM