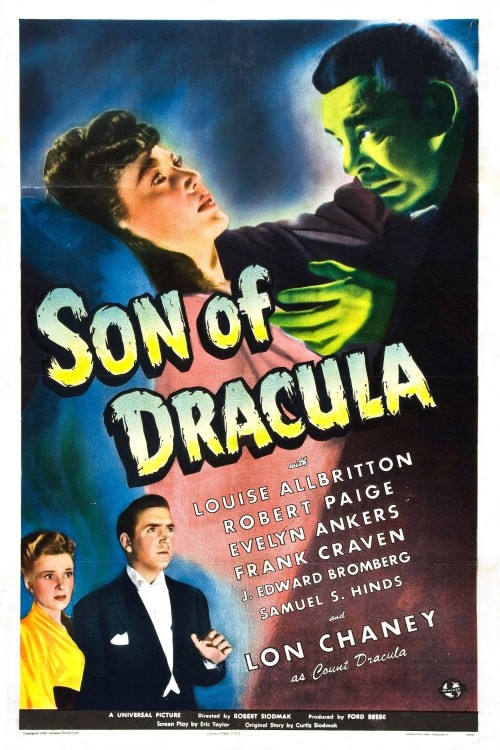 Get more information about Son of Dracula (1943) on IMDb

Count Alucard finds his way from Budapest to the swamps of the Deep South after meeting Katherine Caldwell, of the moneyed Caldwell clan that runs a plantation called Dark Oaks. She's obsessed with occult matters. Who better to guide her through this supernatural world than Count Alucard, whose name no one bothers to spell backwards? No one, that is, except the wily Dr. Brewster, an old family friend. He'll join Professor Lazlo, a specialist in the occult, in fighting this "Alucard" and the woman he's influenced. Or has Katherine influenced him? Meanwhile, Katherine's fiancé, Frank Stanley, will find his courage and his sanity sorely tested when he accidentally shoots Katherine to death, yet finds that she goes on living.

Donner Pass Whiskey
This is a good one, especially in that the woman the vampire is after is more of a villain than he is. Good writing. - @Tuesday, July 10, 2018 4:32 AM
Jp Aragon
Dante is right about this one - very creepy moments - @Sunday, February 18, 2018 5:43 PM
George Estremera
Saw it again last night on TCM for the first time since I was about 10. Still feel real bad for the hero, though he was better off without her. He'd never be the same. Not a bad movie. - @Monday, October 2, 2017 6:20 PM
Joe Libby
I agree. It's a very well made and underrated film. But I don't understand why there is any controversy. The title of the movie is SON OF DRACULA. That's good enough for me. Count Alucard is the son of the main character from the 1931 movie. - @Sunday, February 26, 2017 3:12 AM
windstorm1000
Joe Dante is spot on--its a stylish, atmospheric, well acted flick.  Cheney is good though he occasionally reminds me of a truck driver in a cape--love Louise Albritton--captures all the obsessive nuances of her character without saying 'crazy'.  Women's dresses then very stylish-- - @Saturday, February 27, 2016 2:05 AM
Artie4001
Joe Dante is right saying that this is the most underrated movie. I really liked it a lot. Lon Chaney I think played the part well. I have the Dracula set on DVD and that movie is in it. It has Dracula (1931 and the Spanish Verison), Dracula's Daughter, Son of Dracula and the House of Dracula. Great Box Set - @Saturday, October 17, 2015 6:14 PM
anison roberts
It's my favorite of the Universal horror flicks - @Thursday, February 5, 2015 7:07 AM
Jack Grattan
I don't know why this isn't better known. This was Robert Siodmak's gateway film before making a huge impact in Film Noir, and benefits greatly from Siodmak's keen visual eye and penchant for low key performances. - @Friday, January 9, 2015 7:52 PM
Joe Mauro
Joe's correct, Son Of Dracula is a fantastic film. Chaney was wonderful as the Count. Great story and actors. At 6'3, Chaney was an imposing figure. - @Monday, October 27, 2014 11:05 PM