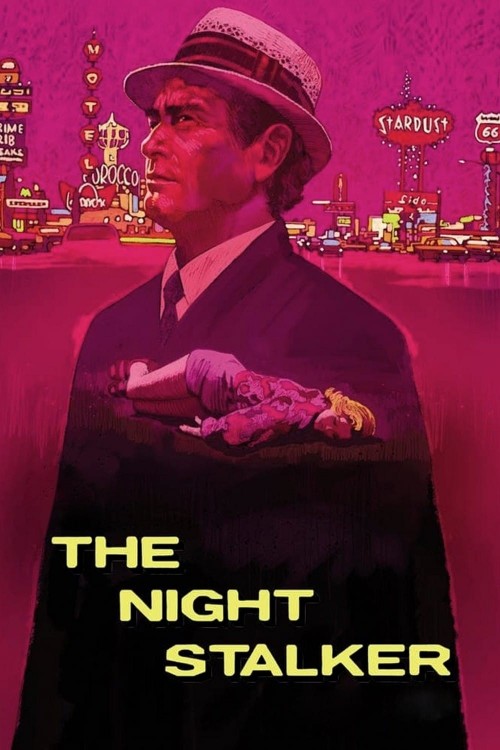 Get more information about The Night Stalker (1972) on IMDb

Carl Kolchak is a newspaper reporter with an abrasive personality that has gotten him fired ten times from various big-city papers. Now he's reduced to reporting for a relatively small-time paper in Las Vegas. It's here he gets the story of his life. But will the local sheriff, or the D.A., or even his own boss, let him print it? He has an ally in the FBI agent brought in to investigate this strange case. It seems someone is biting the necks of young girls and draining their blood. Can this killer with supernormal powers really be a 70-year-old Romanian millionaire? Can he really be a vampire? And can an aging reporter do anything to stop him?

Beth Ann
and. I will always be here for you.i will not push you away.alchol and drugs are very bad .don't steal from other people.care. about other people. I need you and want you.if she.would have .done all of that .he would have been the way he was .more parents need to care about the kids. the kids. always come before the guy . - @Thursday, April 5, 2018 2:38 AM
Beth Ann
It's a crying shame. that. Charles mansons. Mom didn't care .if she would. have. picked him up alot as a baby .held him and. Said I love you I care about you .your so important .your. valuable . I will teach you right from wrong.and. teach you. not to hurt other people.and. teach you to respect other people - @Thursday, April 5, 2018 2:35 AM
Mark Rodriguez
I too was afraid of the bumpers and the theme music of The CBS Late Movie. It creeped me out! - @Thursday, December 28, 2017 12:54 AM
Kimberly J. Sullivan
This scared the hell out of me when I was a kid. - @Friday, November 17, 2017 7:17 AM
John W Landry
Those were the days before HBO and multiple movie channels that just don't have the same charm as when movies were aired on all 3 major networks then. - @Monday, May 25, 2015 6:09 AM
Floyd Wilson
For some reason I used to be afraid of the CBS Late movie theme music. I think that it had something to do with the late Friday night scary movies and The Night Stalker episodes. I'm 44 and that music plus the sound of the announcer's voice still send chills up my spine. - @Sunday, July 22, 2012 10:10 PM
Barry I. Grauman
...and the curious thing about CBS' late-night repeats of "THE NIGHT STALKER", is that they never showed the original opening title- they always incorporated their OWN version in the "LATE MOVIE" title, making sure there was plenty of screen time to show off the various monsters and creeps Kolchak was up against [but then, how many times COULD you show the same 20 episodes, over and over?]. - @Monday, May 30, 2011 8:38 AM
Barry I. Grauman
In those days, when the network was comfortable enough to challenge NBC's Johnny Carson with their "LATE MOVIE" 'package', they often featured "old movies" (including a repeat of their two-part 1976 TV movie "Helter Skelter") with repeats of "old series" [like "THE NIGHT STALKER", on Fridays], and eventually, some new shows {"NO HOLDS BARRED", featuring comedian Kelly Monteith with "reality" segments; and a late-night soap opera, "BEHIND THE SCREEN"- both of which didn't last long}. - @Monday, May 30, 2011 8:33 AM
bldali
wow! i remember being so scared of the CBS late night bumper music! And, I have to say, Helter Skelter is the last thing Id want to be watching in the middle of the night, right before sign-off! - @Sunday, October 17, 2010 4:37 AM
stitchesful
Oh, memories, memories, memories! These movie openings remind so much of my parents and watching nighttime movies with them when I was a kid. It's very nostalgic because both my parents are passed on. - @Sunday, April 18, 2010 7:05 PM