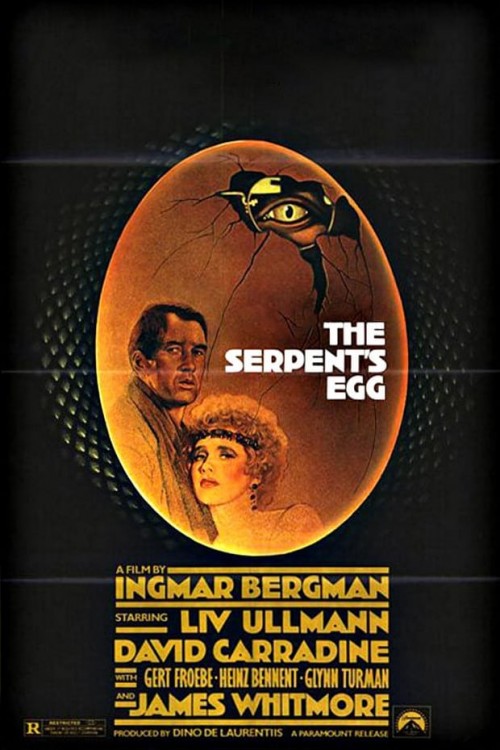 Get more information about The Serpent's Egg (1977) on IMDb

Ingmar Bergman's The Serpent's Egg follows a week in the life of Abel Rosenberg, an out-of-work American circus acrobat living in poverty-stricken Berlin following Germany's defeat in World War I. When his brother commits suicide, Abel seeks refuge in the apartment of an old acquaintance Professor Veregus. Desperate to make ends meet in the war-ravaged city, Abel takes a job in Veregus' clinic, where he discovers the horrific truth behind the work of the strangely beneficent professor and unlocks the chilling mystery that drove his brother to kill himself.

Christiane Herz
David Carradine was good in the movie.I wished he would have been this serious more often.He was looking good and serious at the time-I like it.Anyway, I love most of the DC-Films I have seen.....some very strange, but interesting and not boring films.....David Carradine ,at last, whoever he might have been in reality- never was boring.I loved his  three CDs Kung Fu and Woody Guthrie and as is.He was a great musician -that s for sure !!!!!!´His Interpretation of Guthries Songs were the best ones I have ever heard.Free and Main Drag and Guadalupe ,Big Mack Truck and Picasso... are all great Songs !And ,his Hobo´s Lullaby..as I mentioned..and Pastures of Plenty are timeless ! Hard travellin road......Jesus Christ.....David could sing it ! - @Sunday, December 3, 2017 6:55 PM
cornish chris
Paramount doesnt have the rights anymore - @Wednesday, April 26, 2017 12:59 AM