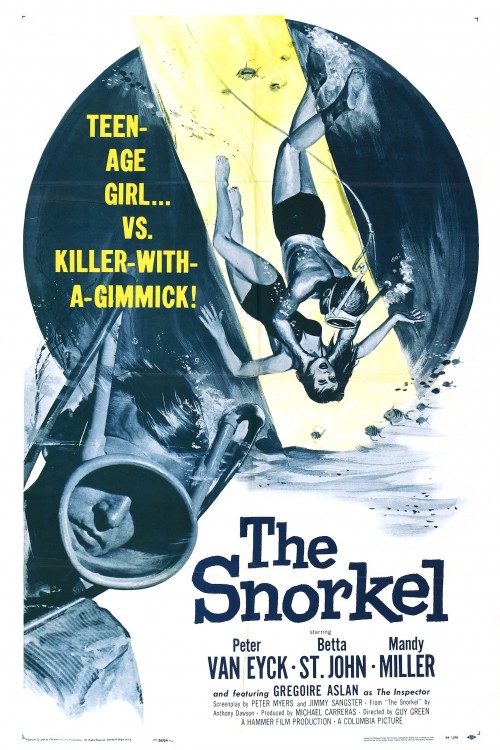 Get more information about The Snorkel (1958) on IMDb

Paul Decker murders his wife in her Italian villa by drugging her milk and asphyxiating her by gas. He cleverly locks the bedroom from the inside and hides inside a trapdoor in the floor until after the body is discovered by servants. He uses a scuba snorkel connected to tubes on the outside to breathe during the ordeal. Decker's stepdaughter Candy suspects him immediately, especially since no suicide note was found. She also is convinced that he murdered her father years before, but her accusations fall on deaf ears. The ruthless Decker even poisons the family spaniel when the pet takes too great an interest in the mask and realizes he will ultimately have to get rid of Candy too.

Dee BRown
Irregardless of any sensibilities and realistic probabilities, this movie kept our attention from beginning to end.  We could not have guessed how it would end.  A Little bit of a surprise, it was.  If one likes this movie, one might also like THE SCREAMING WOMAN which had well-known stars such as Joseph Cotton, Olivia de Haviland, and Walter Pidgeon.  It centered around a woman whom no one believed nor would take seriously, not because she was so young and imaginative, but because she was 'old' and thought to be afflicted with dementia. Two really entertaining movies,, but for this one hats off to Voluptous Viyl. - @Friday, September 9, 2016 1:49 AM
effyleven
It is not possible to breath through a tube longer than about 5 feet. That is because the volume of air in the pipe become insufficient to provide any FRESH air. If you try, you will merely re-breath the stale air you just breathed out. Over about six breaths of the same air it will become devoid of oxygen and full of carbon dioxide, so you will pretty soon suffocate. This problem can be solved by fitting a pair of one-way valves close to the mouthpiece/face-mask, such that the flow goes in only one direction.... breathing in from the inlet hose, and out through the exhaust hose. While the scene here shows two hoses, there is no sign of anything resembling a pair of valves in the system. - @Saturday, April 9, 2016 10:25 PM
Aaron Archambault
Anybody else think this actor reminds them of Rutger Hauer? - @Wednesday, April 25, 2012 8:40 AM
Paul Anthony
Mandy Miller was outstanding- great movie- I have it! - @Tuesday, September 28, 2010 3:01 AM